The Corrupted Forest is one of the 3 planets that you can go to in the new Outer Space Dimension added in the Space Update (v10.0) in which the player can go after reaching The Gryphon Fusion.

This Area is accessible by going into the portal area In Space City.

The Corrupted Forest is a forest inhabited by purple trees and various Enemies that recall plants or animals.

On this planet resides Terra, the first of the three secondary NPCs of the Outer Space Dimension that will assign to the player quests to free the dimension.

There are 2 brand new training zones for each stats, which have requirements of 40 Spd and 3Ocd that slightly increase in power multiplier compared to 150 Qui training areas in Earth Dimension.

There are 6 training area in Corrupted Forest which are separated into 2 tiers for 3 different stats: Strength, Endurance and Psychic

The first tier of training zones give a x3.3Qui multiplier, while requiring 40Spd to train there. 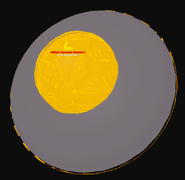 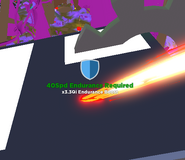 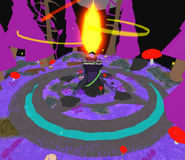 The second tier gives a multiplier equal to x3.6Qui, needing 3Ocd power to train there. 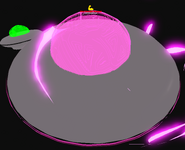 While these training zones have the exact same multipliers and requirements of the ones on Earth, they allow the player to train in the Outer Space Dimension and therefore access easily the Enemies.

The NPC's name is Terra, he gives quests for killing Corrupted Mobs and the player will be awarded with 1.165M

in total. He wears a custom Dominus and dark clothes. His aura is similar to XYZ-Class aura, but purple with a few purple lightning particle around his arms.

The enemies are Corrupted Mobs including Shadow Warriors and Jungle Fiend.

As a bonus reward, the Shadow Warrior can drop one of these items:

As a bonus reward, the Jungle Fiend can drop one of these items:

As a bonus reward, Nightmare can drop one of these items:

Teleport Attack: Nightmare teleports to the player, smashing the ground under them and dealing damage while also applying the Disoriented status to the player.

Meteor Shower: The enemy will cross its arms and pink circles will appear on the ground around it, and after a couple of seconds boulders will fall on those spots, dealing damage to the player if in close proximity to them.

Nightmare Boss Arena overview
Add a photo to this gallery
Retrieved from "https://super-power-fighting-simulator.fandom.com/wiki/Corrupted_Forest?oldid=9177"
Community content is available under CC-BY-SA unless otherwise noted.