The Robot Island is a training island introduced in Update v5.0, replacing the former Prison Island. The island has training zones that are substantially better than the Main Island, Desert Island and Lost Sea Island. However, SS class is required to access the island and at least 10 Sp for the Strength, Endurance or Psychic stats respectively to train there.

As with all other game islands, the Robot Island has a chest called the Robot Chest which allows players to collect 10,000

To the left of the island portal is the Boost Shop, marked by a building. Players may purchase in-game boosts for 25M 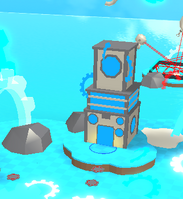 Boost Shop.
Add a photo to this gallery

Retrieved from "https://super-power-fighting-simulator.fandom.com/wiki/Robot_Island?oldid=5564"
Community content is available under CC-BY-SA unless otherwise noted.