The Space City is the initial location where the player finds themselves when reaching the Outer Space Dimension through the portal on the Main Island.

This location represents a technologically advanced metropolis and is the main hub for all the Outer Space Dimension. From here the player, if the requirements are met, is able to reach all the three planets of this dimension:

In this city it is also possible to encounter Astro, the main quest-giver for the Outer Space Dimension (Currently in development).

The Space City is inhabited by high buildings and skyscrapers, decorated with neon light of the three primary colours (red, yellow, blue), and connected through a vast number of roads and a monorail system.

The roads divide the city in blocks, but while in the inner parts the city presents almost solely buildings (aside from small parks), the outskirts of it present the local nature, a pale greenish-gray grass with purple trees and a few small lakes or rivers or a pink liquid.

Around the city, trellis transfer power to light up both the houses and the street lights, while above it is also possible to see various spaceships and asteroids.

There are various particular buildings throughout the city:

The Hangar is the place where the players spawn when reaching the Outer Space Dimension or when teleporting back to the city from another planet.

This area is in the east part of the Space City, and hosts many important features.

First of all, this is a safe zone, therefore players cannot use attacks or be damage until they reside inside it (up until the red line outside the entrance).

Here the player will also meet Astro, the main NPC of this dimension, that will assign to the player the Astro Quests.

On the side of Astro, two Chests are available, the Space Chest and the Space Group Chest, and beside the Space Chest it is possible to the player to access an interactive map of all the areas of the Outer Space Dimension just by clicking (or tapping on mobile) on the name of the sections.

Space Chest, on the left of Astro.

Space Group Chest, on the right of Astro.

Interactive map of the planets.

One the opposite side, the player is able to see the leaderboards for all the different categories, from left to right:

There are 6 training places in the Space City.

The first tier of training zones give a x90B multiplier, while requiring 10Sp to train there. 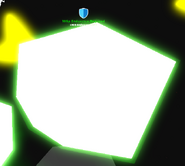 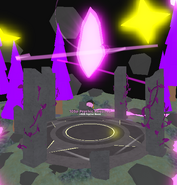 The second tier gives a multiplier equal to x75Qa, needing 150Td power to grind there. 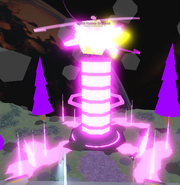 While these training zones have the exact same multipliers and requirements of the ones on Earth, they allow the player to train in the Outer Space Dimension and therefore access easily the Enemies.

This area hosts all the portals that grant access to the different parts of the Outer Space Dimension, while also giving to the player the opportunity of returning to Earth.

There are 4 portals in total:

Most Enemies Defeated, Most Bosses Defeated and Most Powerful Superhumans Leaderboards. 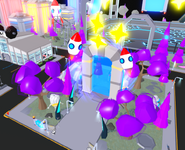 Portal to the Main Island on Earth.

Portals to the different planets of the Outer Space Dimension.

Arena on the west side of the Space City.

Gym beside the Earth Portal.

One of the spaceships flying above the Space City.

Bridge on the north side of the City.

The sun setting between the buildings of the City.
Add a photo to this gallery
Retrieved from "https://super-power-fighting-simulator.fandom.com/wiki/Space_City?oldid=8565"
Community content is available under CC-BY-SA unless otherwise noted.